Showing posts from March, 2019
Show All

March 30, 2019
He again looked at the face, that aquiline nose on the hollowed cheeks now seemed more prominent in sleep. He was somehow holding on to life with a failing heart, which needed an immediate transplant. Fortuitously, the hospital had even managed to get a donor's heart, but the hitch was his high temperature. Should he show ‘Normal’ in the records? He knew time was running out. He decided not to. He remembered the rule. “Ensure the patient’s parameters are all normal. Never rush with an operation,” Dr Vincent would tell his class. Next day Dr Vincent, his affable teacher, passed away.. V ijay Pant is  a freelance writer living in India.
Post a comment
Read more

March 23, 2019
It was the morning after the party. My head hurt and the kitchen and living room looked like a mediaeval battlefield without the bodies. The kitchen was particularly badly hit with glasses everywhere; some were empty but most had the dregs of unfinished drinks. And every surface was liberally adorned with plates most of which had the remains of food. The living room was not much better but a cursory examination suggested that the hordes had at least neglected to spill their drink on the carpet. Then I heard movement; it was Sue. “See you later John.” “OK have a good day.” And with that, she was gone. She was unlucky or possibly lucky enough to need to go to work; given the state of the place, I might have chosen the same option. But my task was to clear up and restore normality. In a way, it was good that she was out. Things had not been good between us for some time. She seemed to think I spent too much time with the drama group in general and with Jill in particular. Jil
Post a comment
Read more 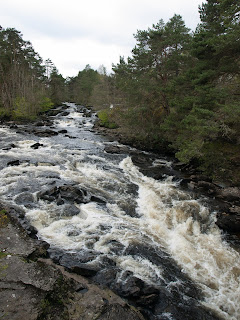 By Josie Gilbert Alison stood on a rocky outcrop, gazing fixedly at the waterfall. The autumn rains had swollen the river and now the torrent tumbled over the edge and fell the fifty or so feet to the pool below, sending up a dense spray. From there, it twisted and lurched over and between the rocks, before disappearing around a corner. A few yellowing leaves spiralled down from the birch trees and glinted like flecks of gold dust as the current carried them away. Alison had been deep in thought for some minutes, impervious to the drizzle that was seeping through her jacket. Suddenly she felt that something was pulling her irresistibly downwards into the abyss and the waiting water. She shook her head to dispel that idea and concentrated once more on the purpose that had drawn her to this spot. Five years had now passed since Rob had died here. A couple of hikers had found his body several miles downstream and when the authorities tracked back along the river, they
Post a comment
Read more

March 09, 2019
The sudden sensory deprivation was overwhelming. She gently raised her body, but attempting to walk, her feet stumbled first left, then right. Hitting an unseen object, her ankle now seared with pain, her arms and hands blindly flaying at the unrelenting darkness. Forward forwards she went, until her hand touched the small door under the stairs. Reaching fearfully inside, her fingertips caressed each raised protrusion. At last there is was, her thumb gently pushed the fuse switch upwards, and once and again the house was bathed in light; but the damage was done, she had missed the end of Eastenders. Don McBeth This 100-word story was originally written for a Daily Mail competition.
Post a comment
Read more

This morning, Patricia Feinberg-Stoner, Rosemary Noble, Angela Petch and I went to a studio to record an edition of Sussex Coast Talking News.  Angela was first up with a reading from her book, Mavis and Dot set in "Worthington on Sea". The only problem was for the rest of us not to laugh because it really is very funny. I used the opportunity to encourage people to write for this blog and I read an example of flash fiction, "A Trick in Time". Rosemary read one of her spooky stories and promoted the CHINDI network of independent authors. Patricia read a short extract from "At Home in the Pays d'Oc" and gave a very professional imitation of a cat. The Sussex Coast Talking News website is here Derek McMillan
1 comment
Read more

“ This is the place,'Eric Messer, Defending Academics Against Libel since 1999.'” Gregory read the imposing brass plate and entered the office with confidence. Mr Messer was sitting behind a heavy polished dark wood desk which was clear of clutter. He rose to greet his visitor. “ Doctor Peters, it is a pleasure to meet you. How may I be of assistance?” Gregory opened the manilla folder and removed the photocopied sheet as if it were an unpleasant laboratory specimen. Mr Messer read it through carefully making marginal notes with a gold Parker pen. There was silence in the room and the sunlight caught the weaving pattern of the pen. Gregory found himself watching the pattern. Mr Messer spoke quietly, “I see Doctor Meer is accusing you of plagiarism. Is he right?” “ Certainly not,” Gregory protested hotly. “ Well, that is a pity. The greater the truth the greater the libel. If the good Doctor accused you of consorting with aliens he could claim it was not libel but sat
Post a comment
Read more
More posts